B-
Nearly all the action sequences could be called “amazing” but unfortunately I’d already seen most of them in the previews, despite attempting to avoid them. But I digress. They finally got Spider-Man’s wittiness down. His mid-fight quips are the best yet and Peter and Gwen are eye-rollingly adorable. But man did the story make no sense. There was so much forced plotting and ridiculous coincidence it’s hard to quantify it all. Far too many characters and plotlines and not enough cohesion. 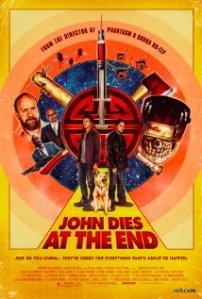 A-
John Dies at the End is big on ideas and light on coherence. Still though, I had a ton of fun watching it. It opens with a twist on Theseus’ Paradox involving an axe used on a zombie skinhead which serves well to establish its pseudo-intellectual oddness. It introduces many, many such interesting asides only to have them disappear immediately, doing little beyond adding to the odd atmosphere of the film. Sometimes cheesy, but often awesome.

A
This is easily the best depiction of a well-tread subject. Chiwetel Ejiofor and Michael Fassbender give performances that will surely earn nominations if not wins. Lupita Nyong’o’s debut will certainly also capture some attention. But I also loved the use of fantastic actors in extremely minor roles, including Paul Giamatti, Benedict Cumberbatch, Paul Dano, and Brad Pitt. I especially loved how contrastingly eloquent everyone was, particularly the slaves. It portrays slave-owners without resorting to cliche, with even the “good” ones having serious faults in their morality. At times, some of the more stylistic sections would drag a bit, and the opening time skip caused me some mild confusion, but overall I enjoyed the competent look of the film. The music and sound effects had some especially great moments of focus too.

A-
Though not a lot happened per se, the expert plot progression engaged me throughout. Gosling played his familiar emotionless protagonist, but played it well. Clooney’s character’s political positions were distractingly exaggerated to a cartoonish level. Hoffman and Giamatti excelled.

B+
Though I’m not too sure about the historical facts the movie portrays, I am sure that medieval dudes hacking each other up with explosive gore was fun. And frequent enough that I didn’t get too bored. Granted, I was putting together a LEGO Slave 1 (given to me for my birthday by the ever-lovely Naomi) during my viewing so my memory of the mediocre acting scenes is skewed. Better than it should’ve been.